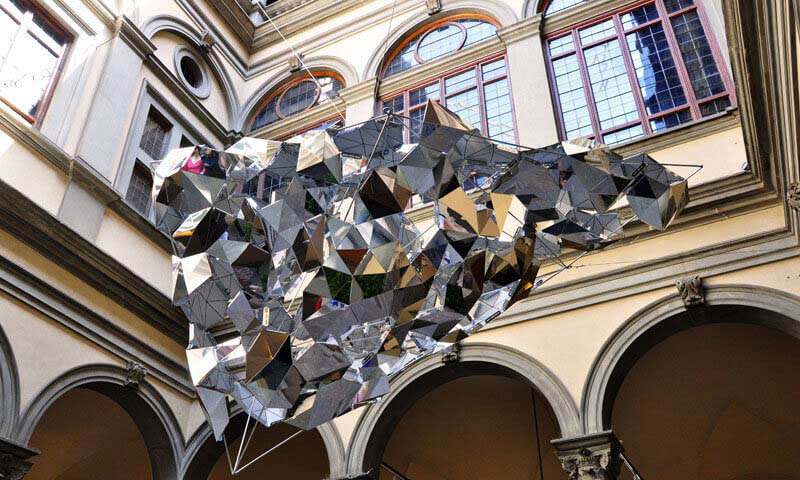 Site-specific installation for the courtyard of Palazzo Strozzi in Florence

With the support of J.P. Morgan and thanks to the collaboration of the Associazione Partners Palazzo Strozzi.

On the occasion of the Florence’s White Night on 30 April 2012, the Fondazione Palazzo Strozzi presents a new installation by Italian artist Loris Cecchini, designed specifically for the courtyard of Palazzo Strozzi and curated by Franziska Nori, director of the Centre for Contemporary Culture Strozzina.

Loris Cecchini’s work consists of a group of large sculptural shapes, each one comprising of hundreds of reflecting modules, suspended inside the palazzo courtyard. In assembling these modules together, the artist creates a chain of elements that condense to form new volumes in certain areas and disperse in others, leaving empty spaces that allow the observer to see right through the sculpture.

Through its multiple reflecting surfaces, the work of art interacts with the reality surrounding it, reflecting the image not only of the Renaissance architecture, the sky and the natural light filtering through to the courtyard, but also of the observer himself as he or she looks up. Aerial Boundaries offers the public several different levels of individual and collective experiences. In a dual movement of construction and deconstruction, the installation plays on the uncertain relationship between the geometry of the elements and the loss of a properly defined relationship of dimension and distance.

Cecchini has based the development of his installation on a concept that has played a crucial role in the history of Western art and philosophy from Antiquity to the Renaissance and on up to the present day: the concept of Platonic Solids. These geometric shapes are regular polyhedrons, three-dimensional shapes which Plato interprets as symbols of mathematical and conceptual perfection that serve as intermediaries on the gnoseological plane between unruly natural phenomena and the hyper-celestial perfection of the world of ideas, merging elements taken both from Empedocles’ theory of the four elements (earth, water, air and fire) and from Democritus’ theory of atoms.

Platonic Solids have been used throughout the history of Western culture, since the days of the ancient philosophers, and right up to the first modern astronomers, as basic elements for explaining the structure of the cosmos. They are also one of the main keys for interpreting the Neo-Platonic precepts of the 15th century Humanists in the realms of philosophy and of the arts. From Leonardo da Vinci’s Vitruvian Man to Brunelleschi’s perspective, and right on up to the so-called “divine proportion” of Piero della Francesca, Renaissance artists had discovered in those models the tool to allow them to no longer confine art to the mere observation of nature but to raise it up to the level of a study thus probing the relationship between man and nature, transcending the ephemeral aspect of nature in order to penetrate into the very structures and ideal principles that regulate it.

The courtyard of Palazzo Strozzi is one of the symbolic locations of Renaissance philosophical and artistic thought. Man places himself at the centre of a measured geometric structure, a controlled space that follows given rules that he himself has created. Thus the human figure is the leading player and the conscious creator of this environment, which also embodies, in visual terms, a given idea of the organisation of the world, and of the ordering of society based on a measured and carefully thought-out vertical structure. The palazzo’s stern architecture is based on complex mathematical and geometric studies that have produced a controlled perspective of the architectural volume, turning it into the very symbol of a vision of the relationship between man and the spiritual dimension. Its imposing geometric shape is closed in on itself like a monolith, but the courtyard in its verticality opens up to the infinity of the cosmos, an allegory of the relationship between the earthly and the transcendental dimensions.

Loris Cecchini’s work sets out to play the role of a diaphragm allowing us to acquire a fresh awareness of the deeper sense of this environment, revisiting it on the basis of our condition as modern men. Cecchini places a prism between heaven and earth, a suspended element that fragments and destroys all possibility of a single vision thanks to the reflecting and distorting surfaces of the elements making it up. Man is no longer at the center of the vanishing point but becomes a fragment reflected in an endless game of illusory echoes. The architecture of the palazzo, the sky, the natural light and the observer shatter into elementary particles suspended in a void.

The sculpture is made up of a number of different volumes, each one of which comprises countless reflecting modules folding in on themselves and building up in an irregular rhythm between density and void. The modules making up the volumes are irregular octagons that Cecchini has designed as two-dimensional units for mass production. The modules cluster like cells around metal structures that are also designed as irregular polyhedral shapes. The shapes are never declined in a regular fashion; instead, they are subjected to a dual physical and conceptual process of distortion. This produces a construction that is both open and multifaceted, questioning and distorting the perspective regularity and clarity of space. Regular Platnic Solids are transformed into arrhythmic modules. The process used by Cecchini to produce his installation shows similarities with the natural growth processes of cells or crystals that develop or generate in search of a perfect balance. The shapes that the artist creates recall the perfect yet irregular structure of crystals that generate a prismatic effect when impacted by light, a kind of unending visual echo that reflects every image of the reality surrounding it. The work appears to absorb the context in which it is set. The focal point is no longer the object itself but the environment that it creates, leading to a dematerialisation of the initial volumes and the initial matter.

Aerial Boundaries is based on the principle of the transfiguration of sculpture, calling into question its three-dimensional and material bases. The work breaks down the observer’s gaze and sends it back towards him, towards the sky and towards the architecture in which it is set. The different shapes created by the artist appear to act as a kind of filter, a complex prismatic figure that appears to anyone standing inside the palazzo, with its absolutely regular and completely stable parallelepiped shape, who turns his or her gaze towards the infinity of the sky in search of light. Thus the installation is, in effect, a reflection on the human condition in the 21st century, a far cry from the clear and reassuring Renaissance vision of the cosmos and of the rational relationship between man and transcendence as an experience for reaching the infinite. Observers experiencing the work no longer see a single ascent into heaven and infinity through the regular shapes of geometry but through a radical fragmentation: fragments of architecture, fragments of the sky, either reflected or direct, and fragments of man himself as he seeks to decipher the world.