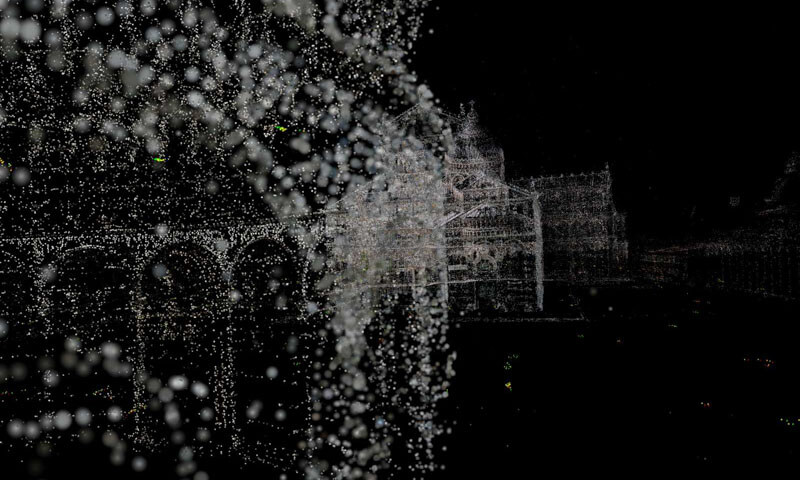 Marnix de Nijs is one of Netherland’s most famous multimedia artists. He has been invited by the CCCS to create a site specific installation in Florence. From May 15th until June 30th 2008 the installation will be shown at the CCCS at Palazzo Strozzi.

Exploded Views – Remapping Firenze comprises two industrial treadmills placed in front of a huge screen showing, part film, part computer graphics, the deserted streets of a virtual Florence. The action of the observer’s body is the determining factor: the 3D images are set rolling by the physical effort made by the viewer, revealing an imaginary, “poetic” Florence where real architectural shots explode into an infinity of pixels. The speed of the observer/runner has a direct impact on the intensity of the aesthetic experience. In the work of Marnix de Nijs, the observer becomes the protagonist. The interface between the body and technology hands over control to the viewer who decides which direction to take and how to up the intensity of the images traversed.

While the visual world represented concentrates on the concept of emptiness, on the total absence of any human imprint and on the sheer beauty of the spaces, the acoustic element takes on a new dimension with a store of sounds registered in the city.
The visual material in 3D draws on the latest experimental technology developed in the Technische Universität Darmstadt, Germany. De Nijs is the first artist to make use of this technology, which makes it possible to combine cinematographic quality with interactive graphics.
Students from the Master Course in Communication Design at ISIA, Florence assisted De Nijs in the creation of the project.

The work Exploded Views – Remapping Firenze was made especially for the CCCS. It’s the first of a series of works by leading international artists who have been invited to Florence to create site-specific works that reflect the diverse realities of this city.

Marnix de Nijs is based in Rotterdam. He is engaged in exploring the dynamics between the human body, machines and other technology. Trained as a sculptor, de Nijs is now best known for his interactive machines which play with the perception and control of sounds and images. He has gained international recognition as one of the leading exponents of interactive sculpture.

The Marnix de Nijs project Exploded Views – Remapping Firenze, presented in collaboration with Fabbrica Europa, is sponsored by the Royal Netherlands Embassy and is part of “Olandiamo?- the Cultural Festival celebrating 50 years of the Dutch Institute of Art History in Florence”.