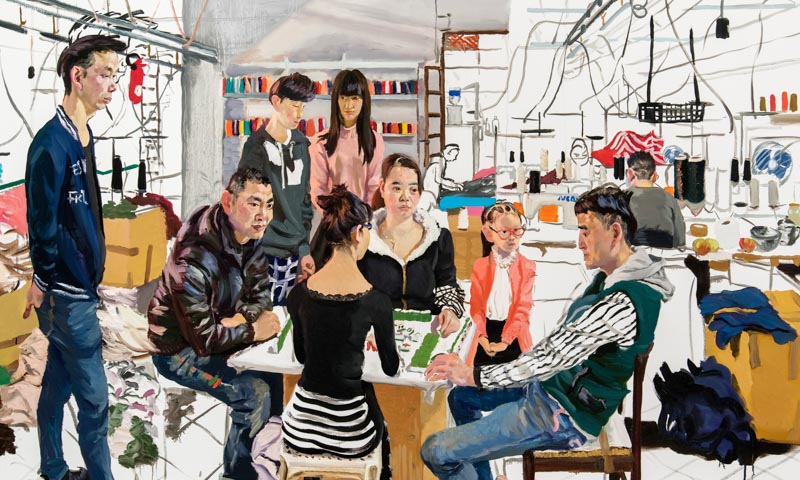 Starting 22 April 2016, the Strozzina area of Palazzo Strozzi in Florence is hosting a major one-man show devoted to the work of Liu Xiaodong, one of China’s most important and original contemporary artists.

The exhibition, devised and produced by the Fondazione Palazzo Strozzi, showcases a broad selection of paintings, drawings and photographs on which the artist has created during a spell in Tuscany lasting from the autumn of 2015 through to the spring of 2016. The main themes of the work on display are the cities of Florence and Prato and the Sienese countryside, which the artist has observed and experienced through direct contact with the local people, but with a special focus on the local Chinese communities.

Liu Xiaodong, who was born in Liaoning province in 1963 and trained in Beijing, is celebrated for his very personal painterly style midway between historical painting and a reporter’s angle on the contemporary world. Seemingly routine moments or daily events take on an epic monumentality in Liu’s large canvases, akin to stills recording places in the world marked by conflict or by social and human tension. With their style which, while summary and extremely controlled, is at the same time emotional and heavy with texture, Liu’s pictures reproduce images of everyday life, almost always in the open air, inhabited by the men and women who populate the countryside or the cities in which the painter has chosen to spend time. A crucial role in his creative process is played by photography, which he uses as a tool of observation and a model for his painting, but also as an objet d’art in its own right for display alongside his paintings and preparatory sketches, testifying to his urgency to forge a link between different artistic techniques and cultural realities.

The original idea behind Palazzo Strozzi’s project was sparked by the artist’s special interest in the Chinese community in Prato, the largest such community in Italy and one of the most important in Europe, which is now in its third generation. But in addition to other sites around Florence which host large Chinese communities, such as San Donnino and Osmannoro, the artist also addresses the classic Tuscan countryside, the hills of the Florentine and Sienese Chianti districts. Taking his inspiration from these areas, he has decided to produce a number of paintings depicting the “dreamlike” “picture postcard” landscape of the Val d’Orcia and the Crete Senesi. The exhibition at Palazzo Strozzi also provides an opportunity for a reflection on the migration of peoples and the ways in which they interact with their new physical, geographical and cultural environments, including in connection with recent critical events on Europe’s borders – events which Liu has witnessed in the first person in Bodrum in Turkey, and in Kos in Greece.

The project will be completed by the publication of a catalogue devoted to the artist and by a broad programme of activities designed to tie in with the exhibition including conferences, workshops and lectures exploring the exhibition’s themes in greater depth in Florence and other venues in Tuscany.