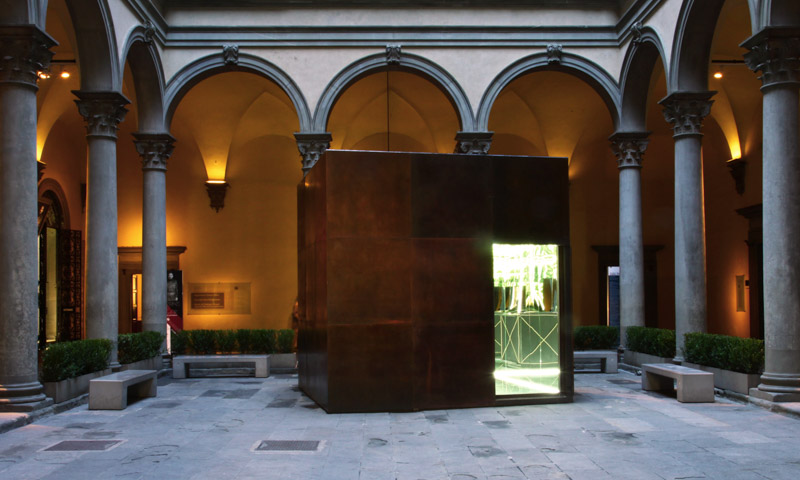 From 1 October 2010 to 23 January 2011, visitors to Palazzo Strozzi will encounter Metrocubo d’Infinito in un Cubo Specchiante (Square Metre of Infinity in a Mirror Cube) by Michelangelo Pistoletto. This installation will be on view concurrently with the exhibition Portraits and Power: People, Politics and Structures in the CCCS and Bronzino. Artist and Poet at the Court of the Medici on Palazzo Strozzi’s piano nobile.

Metrocubo d’Infinito in un Cubo Specchiante (Square Metre of Infinity in a Mirror Cube), an installation covered externally with opaque steel plates and internally clad with mirrors, is intended to offer the public an opportunity to experience boundless space. Its centre will be occupied by one of this Piedmontese artist’s historic works, the Metrocubo di Infinito (Square Metre of Infinity), 1966, which consists of exceptionally opaque surfaces on the outside and reflecting surfaces on the inside, thus taking the potential of refraction to its extreme limit.

Mirrors are a crucial element in Pistoletto’s art. They represent the physical and intellectual extension of the human mind, revealing that which is normally hidden from the human eye. Pistoletto himself argues that “the mirror expands the eye’s characteristics and the mind’s capabilities to the point where it offers a vision of totality”. He also says that “this space for concentration is designed to be one of art’s places of prophecy, a territory where art succeeds in expressing its religious value”. The work of art becomes a secular place for meditation, where man with his capacity for imagination is the only true value.

The event follows similar initiatives in 2008 and 2009, when Wang Yu Yang (Harbin, China, 1979) and Yves Netzhammer (Schaffhausen, Switzerland, 1970) produced site-specific installations for the courtyard. The project, devised and produced by Fondazione Palazzo Strozzi – in cooperation with Cittadellarte-Fondazione Pistoletto and Galleria Continua, San Gimignano / Beijing / Le Moulin – marks the start of a new partnership with Castello di Ama per l’Arte Contemporanea in Gaiole in Chianti (Siena).