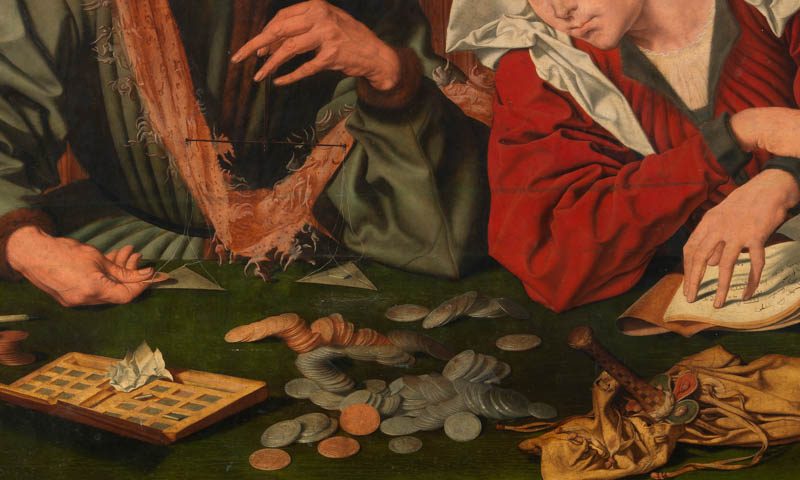 Masterpieces by Botticelli, Beato Angelico, Piero del Pollaiolo,the Della Robbia family,and Lorenzo di Credi-the cream of Renaissance artists-show how the modern banking system developed in parallel alongside the most important artistic flowering in the history of the Western world. The exhibition also explores the links between that unique interweave of high finance, economy and art, and the religious and political upheavals of the time.
Money and Beauty. Bankers, Botticelli and the Bonfire of the Vanities recounts the birth of our modern banking system and of the economic boom that it triggered, providing a reconstruction of European life and the continent’s economy from the Middle Ages to the Renaissance. Visitors can delve into the daily life of the families that controlled the banking system and perceive the ongoing clash between spiritual and economic values that was such a feature of it. The saga of the art patrons is closely linked to that of the bankers who financed the ventures of princes and nobles alike, and indeed it was that very convergence that provided the humus in which some of the leading artists of all time were able to flourish.
The exhibition takes the visitor on a journey to the roots of Florentine power in Europe, but it also explores the economic mechanisms which allowed the Florentines to dominate the world of trade and business 500 years before modern communication methods were invented, and in so doing, to finance the Renaissance. The exhibition analyses the systems that bankers used to build up their immense fortunes, it illustrates the way in which they handled international relations and it also sheds light on the birth of modern art patronage, which frequently began as a penitential gesture only to then turn into a tool for wielding power.

Curated by art historian Ludovica Sebregondi, author of Iconography of Girolamo Savonarola, 1495-1998, and Tim Parks, writer, translator and author of Medici Money – Banking, Metaphysics and Art in Fifteenth-century Florence, the exhibition aims to provide the visitor with an opportunity to look at art from a cross-disciplinary perspective involving economists, politicians and diplomats. It examines the story of how the Florentine Renaissance grew from the supposedly open, but more often actually hidden, relationship between art, power and money.
The exhibition’s distinguished scholarly committee includes: Cristina Acidini, Superintendant for the Historic, Artistic, and Ethno-anthropological Heritage and Polo Museale of the City of Florence (Chair); Alessandro Cecchi, Director of the Galleria Palatina and the Boboli Gardens; Franco Franceschi, Professor of Medieval History at the University of Siena, Arezzo; Dora Liscia, Professor of the History of Applied Art and Goldsmiths’ Work at the University of Florence; Robert Mundell, Nobel Economy Prizewinner; Beatrice Paolozzi Strozzi, Director of the Museo Nazionale del Bargello; Jacob Rothschild, British investment banker and philanthropist; and Gerhard Wolf, Director of the Kunsthistorisches Institut in Florenz-Max Planck Institut.

Crucial to the illustration of this story are the masterpieces created for the great banking families, while the trajectory of some of Florence’s great families, rocked by financial setbacks, drew to a close with the political and religious storm triggered by Savonarola. With his “bonfires of the vanities”, the Dominican friar rejected everything that the Renaissance had stood for, even though he was part and parcel of it himself.
The exhibition also uses the detailed depiction of episodes in bankers’ daily lives (the work of several leading Flemish artists) to illustrate the era when Florence was the financial capital of the world, and an array of multimedia tools help the visitor to get a clear perception of the ways in which trade was conducted and money travelled throughout the known world at the time.