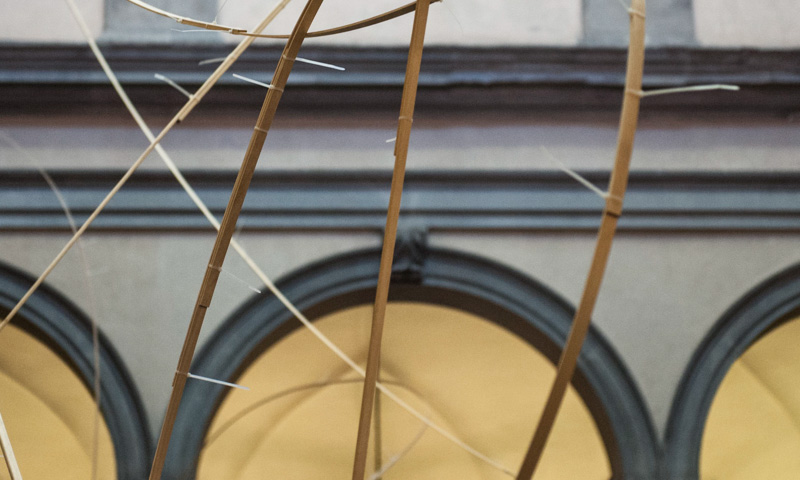 Contemporary art has always been an integral part of Palazzo Strozzi’s identity, a stimulus to build a bridge between past and present, between public space and private enjoyment, between art and the city.

These thought-provoking site-specific events are designed to trigger a reflection on the Courtyard as a lively and dynamic space in which the public is encouraged to play an active role. The artists will be treating the space as though it were a natural open-air workshop, interacting with its architecture and its symbolism to produce new physical and conceptual interpretations. Deeply historical yet totally contemporary, elitist yet accessible to all, at once private and public, the Courtyard of Palazzo Strozzi offers itself as a venue for encounter and exchange, but also as a source of contradiction, inconsistency and tension, a historical space whose doors open out onto the city, to become a crossroads of people, gazes, images and narratives.

The work of Franco Menicagli (Campiglia Marittima, Livorno, 1968) has always focused on the anti-monumentality of sculpture through the use of ephemeral and malleable materials. For Palazzo Strozzi, Menicagli has designed a site-specific installation entitled Who Doesn’t Like Gazing at the Sky?. It consists of three pilasters set in the centre of the Courtyard as a hub from which countless strips of suspended wood emerge, in tension amongst themselves and with the architecture, to create a powerful and evocative reinterpretation of the space. Menicagli’s work is characterised by a formal artistic vocabulary in which precarious balance, torsion and compression destructure a space in order to redefining that space in a new and symbolic manner.

The Kinkaleri collective (which has been active since 1995 and comprises Massimo Conti, Marco Mazzoni and Gina Monaco), with its project entitled All!, has developed a mechanism for transmitting the bodily code by assimilating it to language and extending its capacity for communication. Their performance entitled Everyone Gets Lighter | All! , revisited for the Courtyard of Palazzo Strozzi, involves spectators in the expansion of their bodies’ potential for expression and in developing a new form of language. Each letter of the alphabet is associated with a given movement of the body, resulting in the creation of choreographic movements for developing phrases which the artists will work on producing in the Courtyard together with the public.

The work of Bianco-Valente (Giovanna Bianco, Latronico, Potenza, 1962; Pino Valente, Naples, 1967) focuses on analysing the processes involved in the perception and definition of reality. Through performances, videos and installations, this double act from Naples probes the contrast between body and mind, reality and imagination, the natural and the artificial. Their work slots into existing spaces, highlighting those spaces’ flaws and their architectural peculiarities, while simultaneously interpreting the many relationships and stories associated with them.

On 15 January 2015 the courtyard will be hosting a special event devised by CHERYL (a collective from New York who have produced performances and happenings for such celebrated museums as the MoMA and the PS1 in New York City). Cheryl will be spending a week in Florence, working with the Palazzo Strozzi team and with local artists to produce a collective performance experience in the Centro di Cultura Contemporanea Strozzina, a transformational happening designed to destructure the exhibition space and to completely overturn the function usually associated with it.

20 November–30 November 2014
Kinkaleri
A set of six performances from their series entitled Everyone Gets Lighter | All! in the Courtyard of Palazzo Strozzi
Project curated by Alessio Bertini