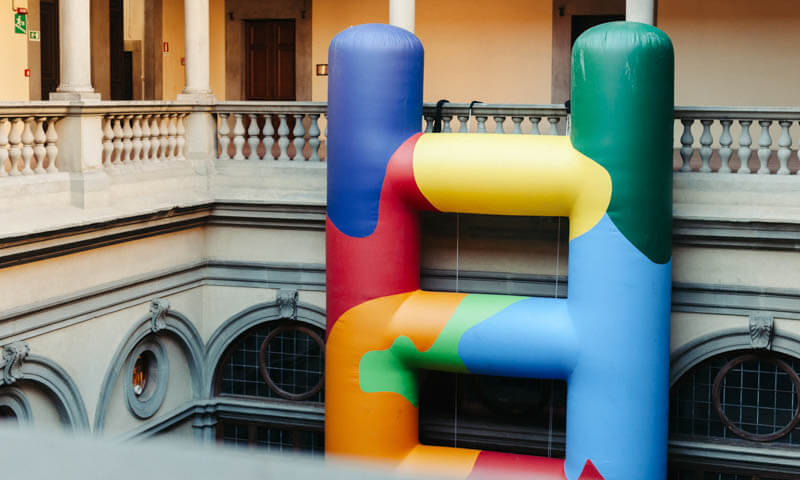 Contemporary artist Paola Pivi interacts with Renaissance architecture, with a surreal and colourful inflatable staircase over 20 metres tall in the courtyard of Palazzo Strozzi.

Celebrated Italian contemporary artist Paola Pivi will be invading Palazzo Strozzi from 11 December 2015 to 24 January 2016, with a monumental installation entitled Untitled (Project for Etchigo-Tsumari). The installation consists in an extremely colourful inflatable staircase over 20 metres tall that sets out to exasperate the contrast between classic and contemporary in the palazzo’s Renaissance courtyard.

As in some kind of paradoxical take on “Magical Realism”, Paola Pivi’s work endeavours to alter our ordinary perception of reality. Upside-down aeroplanes, zebras captured in Alpine scenery, multicoloured bears or donkeys sailing a boat: the artist’s stock-in-trade consists of objects, animals and people that lose their original significance thanks to a change in their context, scale or situation, and end up leading us into a bizarre and outlandish world.

The staircase in the Palazzo Strozzi Courtyard is an object devoid of all practical function; outsize, unstable, temporary and out of context, it becomes the tool for an ascension which is no longer physical but metaphorical, dragging both the audience’s gaze and their emotions aloft. The whole palazzo becomes part of Paola Pivi’s transitory installation. Like an evocative and kaleidoscopic element of division, the monumental inflatable staircase clashes with the controlled and symmetrical perspective of the palazzo’s Renaissance architecture and with the measured and bland colours of the courtyard’s grey pietra serena stone and cream plaster. Paola Pivi delivers an emotional shock, producing a surreal event that breaks with the accepted conventions of space to generate new and unexpected meanings.

Paola Pivi, who was born in Milan in 1971, lives and works between Anchorage in Alaska and New Delhi in India. Initially showing an interest in the sciences, Pivi set out on her career as a student at Milan’s Faculty of Engineering, but she soon left university to enrol at the Accademia di Belle Arti di Brera. Winning the Golden Lion at the Venice Biennale in 1999, Pivi entered her work in the Biennale for the second time in 2003, in Manifesta in 2004 and 2014, and at the Berlin Biennale in 2008. She has shown her work at leading museums and galleries, including the P.S.1 MoMA in New York, the MACRO in Rome, the Kunsthalle Basel in Basel, the Portikus and the Schirn Kunsthalle in Framkfurt, Palazzo Grassi in Venice, the Tate Modern in London and the Public Art Fund in New York (for which she produced an installation in which a Piper Seneca plane rotated on its own axis, suspended by its wings). Her work may be admired in a number of prestigious permanent collections, including the Guggenheim Museum in New York, the Centre Pompidou in Paris, the Fondazione Sandretto Re Rebaudengo and the Castello di Rivoli in Turin, and the MAXXI – Museo Nazionale delle Arti del XXI Secolo in Rome.

Untitled Project was commissioned and produced by the Echigo-Tsumari Art Triennale in Japan. The installation in Palazzo Strozzi Courtyard has been made possible through the generous support of the Banca CR Firenze and the cooperation of the Massimo De Carlo Gallery, Milan/London