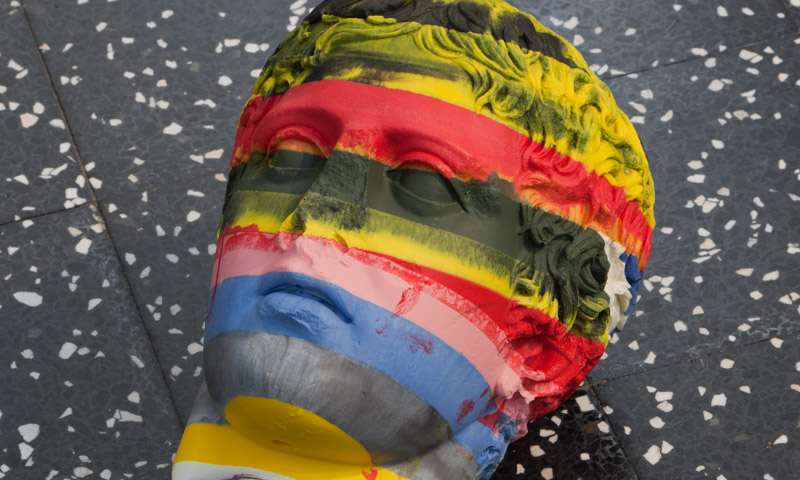 Contemporary artists frequently use new forms and materials to address the broad range of time in the ongoing dialogue between the past and the future. Keeping this in mind, the exhibition reflects on the way artists today are rediscovering materials that were previously dedicated to an academic sphere, such as bronze, stone or ceramic. These materials are revitalized and used in a conceptual manner to reflect on themes of the monumental, the fragment, the way materials wear over time, and the recovery of the recent modernist past.

The exhibition is designed to tie-in with the Palazzo Strozzi exhibition on Power and Pathos. Bronze Sculpture of the Hellenistic World (14 March – 21 June 2015), organised in conjunction with the J. Paul Getty Museum in Los Angeles and the National Gallery of Art in Washington, showcasing outstanding examples of large bronze sculpture to illustrate the development of Hellenistic art between the 4th and 1st centuries BCE. The simultaneous presence of these two exhibitions allows Palazzo Strozzi to offer its visitors a unique opportunity to experience a dialogue between ancient and contemporary worlds of sculpture.  The sculpture of the past remains today chiefly due to its ability to survive the test of time. In several instances, bronzes remain in broken states despite the perception of these works today being split between an impression of durability and an impression of a certain ephemeral quality; this transforms original connotation and value.

As curator Lorenzo Benedetti emphasised, the CCC Strozzina show allows visitors to transcend beyond the mere comparison between the past and the present in order to identify crucial aspects of contemporary sculpture in contrast with the culture of the image. Consumed in the immediacy of the present, the transformation of its meaning and value, and the “death” of its original state, the exhibition allows to measure the passage of time, responding to the need to look towards an indeterminate future.

Sculpture’s relationship with power and history is highlighted in the sculptures of Francesco Arena through his exploration of the concept of the monument. Sculpture as a copy and thus as the transfer of knowledge to other future cultures can be seen primarily in the work of Oliver Laric, who uses new 3D techniques to reinterpret existing cultural symbols and images. The temporal and specific nature of materials, on the other hand, may be seen in the compositions of Mark Manders, but also in those of Michael E. Smith and Oscar Tuazon.  The distortion, loss and rediscovery of sculpture is a frequent feature of the work of Nina Beier and of the fragmentary, revisited or mutilated work of Francisco Tropa.  Time can also be evoked through the fragility of materials which appear to enclose within them a far broader time span, as in the work of Katinka Bock and of Giorgio Andreotta Calò. Thus the technique of sculpture has a continuity value in developing styles and languages that manage to convey contemporary forms by building them into a scale of research stretching from the rediscovery of a recent modernist past, as for example in Michael Dean‘s and Dario D’Aronco‘s use of concrete, to references to more organic forms, for example in the photographs of N. Dash depicting the impact on matter of the final stage in a time process. The artistic research of Fernando Sánchez Castillo focuses on the symbolic and political power of the monument in contemporary culture.

We would like to thank the Embassy of the Kingdom of the Netherlands in Rome for its kind contribution and for its valuable support for Dutch and Dutch-resident artists whose work is on display in the exhibition.