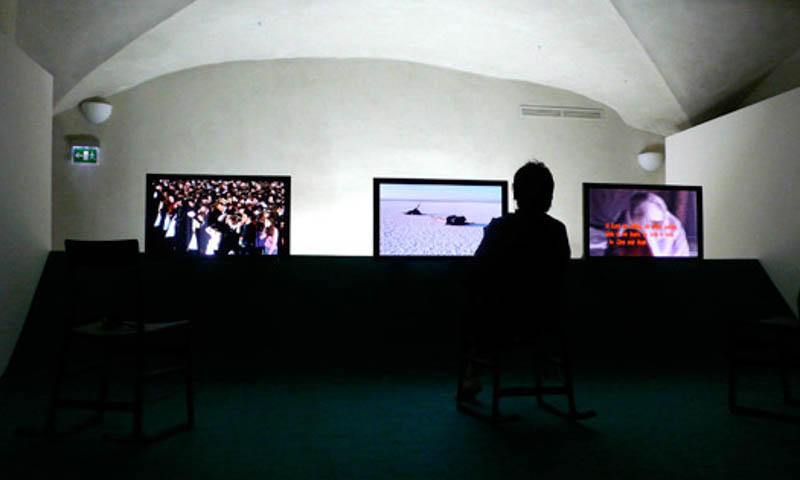 Video Art has become one of the most significant channels of contemporary artistic expression since its first appearance in the 1960s. Its versatility in technical terms makes it a form of art capable both of adopting a stance on social, political and anthropological issues and of conveying vision at a more introspective and personal level. It thus constitutes a fertile terrain for dialogue and the exchange of ideas with other media through a hybrid language stimulating the artists’ imagination and critical thinking.
In the course of its history, Video Art has not only rethought and revitalized investigation of the audio dimension through the use of words and texts but also examined the range of visual effects made possible by the electronic image so as to develop new semantic mechanisms embedded in moving pictures. Above all, the period since the 1990s has seen both the birth of new explorations and narrative strategies with respect to the medium’s intrinsic expressive potential and a readiness to draw upon stimuli and ideas from areas like painting, sculpture, photography and cinema as well as the vocabularies of television, literature, dance and drama.

Curated by Anita Beckers, Worlds on Video – International Video Art presents an international overview of what has recently been produced in the field of Video Art by some of its most significant practitioners. The exhibition juxtaposes the works of 33 artists with different backgrounds and origins, concentrating primarily on the broad variety of the modes of expression, techniques and artistic languages adopted. The artists’ interests range from analysis of the technological tool and its specific potential to the pictorial or photographic use of the screen. There are also numerous references to and points of contact with cinema.

The exhibition therefore focuses on the various artistic strategies employed in Video Art, encompassing the documentary approach of Harun Farocki and Alfredo Jaar, the subtle interweaving of fiction and documentary developed by Charlotte Ginsborg and the highly structured and complex theatricality of the mise en scène in the work of Victor Alimpiev.

Citations from the history of cinema serve in some cases as material for deconstruction of the illusionistic narrative framework upon which the Hollywood movie industry is based. At the same time, the use of some elements peculiar to the language of cinema attains expressive autonomy and is enriched with new meanings, the psyche and the sphere of human feelings, for instance, in the work of Jesper Just.

Philippe Grammaticopoulos’s 3D animation, Kota Ezawa’s adoption of the formal and narrative technique of comic strips, and the stark minimalism of the protracted shots that structure the works of Marina Abramovic and Sislej Xhafa are further examples of the broad range of expressive possibilities characterizing Video Art. The aim is to offer spectators a selection of works through which they can examine the various artistic approaches and discover both the contrasts stemming from differences in cultural context and the common features due to the increasing globalization of the art world.

Worlds on Video focuses on single channel works, each presented on a separate screen, so as to function as a sort of library allowing visitors to compare the different approaches.

The exhibition is designed to foster in-depth viewing of the individual works and hence the creation of an intimate, personal relationship between spectator and video. The multiple-admission ticket permits and indeed encourages repeated visits.

Tasja Langenbach’s individual descriptions of the works provide visitors with essential pointers in accordance with the Strozzina’s educational project. The public will be introduced to the language of Video Art with an abundance of background information and the art-mediation programme developed by the CCCS will provide a whole range of opportunities for understanding in greater depth.

It is cooperation of collectors and curators that has made it possible to present this selection of works. We wish to thank Heather & Tony Podesta (Washington), Isabelle & Jean-Conrad Lemaitre (London). Manuel de Santaren (Boston), Pedro Mendes Siruffo (Belo Horizonte), Julia Draganovic (Naples), Claudia Löffelholz (Modena), Melissa Schonder (Washington), Liliana Rodriguez and Yvonne Siebig (Frankfurt) in particular for their invaluable support as well as all the galleries of the artists presented for their kind collaboration.