by Riccardo Lami and Ludovica Sebregondi

“We’re all in the same boat” Marina Abramović wrote on the poster that she designed for the Barcolana regatta in Trieste in October 2018 and which was also displayed on the façade of Palazzo Strozzi for the duration of its exhibition entitled Marina Abramovic. The Cleaner, reflecting on the fact that “we are all on the same planet: those who love the sea love the land, and those who love the land love our future.” That slogan, originally coined in an environment-related context, is now taking on a broader significance in 2020: a message of mutual trust and hope together with a reflection on the need to forge a common front at such a difficult time. It has been quoted on countless occasions in recent weeks, first and foremost in the social media. On a wall in the popular Sant’Ambrogio market in Florence, it even appeared on a poster signed with explicit acknowledgement of its origin: “D’après Marina Abramović”, with the “B” of the Barcolana being replaced by the “C” of Covid-19.

Reflecting on her life and on the world in which she lives, Marina has always shone the spotlight on crucial aspects of the human condition, succeeding in communicating with the present better than any other artist, interpreting its inconsistencies and its urgencies. Faith in the community and opening up to others are goals that Marina reached over time, from her initial performances in which she probed her capacity for individual resistance, via the performances that she created with Ulay. One of those that appears to us today to be particularly strong and relevant to the present moment is Rest Energy (1980), an extreme portrayal of trust, in which Marina’s life was in Ulay’s hands for four minutes and twenty seconds, creating an unforgettable image of tension, a metaphor or our relationship with others. “I held a large bow and Ulay pulled back its string, his fingers holding the base of an arrow pointing straight at my chest. We were both in a state of constant tension, each of us pulling in their direction, with the risk that, if Ulay had loosened his grip, I could have ended up with an arrow in my heart. In the meantime, a small microphone was fixed to our chest so that the audience could hear our amplified heartbeat. And our hearts beat faster and faster.” (from Walk Through Walls: A Memoir, 2016).

Over time, the flow of energy, the deep exchange that previously existed between her and Ulay embraced a growing number of people searching for “total vulnerability and openness to the audience.” Her manifesto symbolising this is The Artist is Present, a performance held at the MoMA in New York in 2010, in which over 1,675 people took turns to sit opposite the motionless and silent Serbian artist and to stare at her for as long as they wanted. On that occasion Marina perceived people’s “immense need to have even just a contact.” In March 2020 her words reflecting on our relationship with others are more topical than ever.

“Towards the end of The Artist is Present I felt a mental and physical tiredness that I had never felt before. Also, my point of view, everything that had seemed important to me before – daily life, the things I liked and the things I didn’t like – had completely changed.” Just as she has done throughout her artistic career, Marina reflects on deprivation in order to assign fresh importance to the essential things in life. Isolation, silence, the disappearance of a direct relationship with others help us to grasp the importance of staying in touch and of valuing the gaze and the presence of the people we have before us. 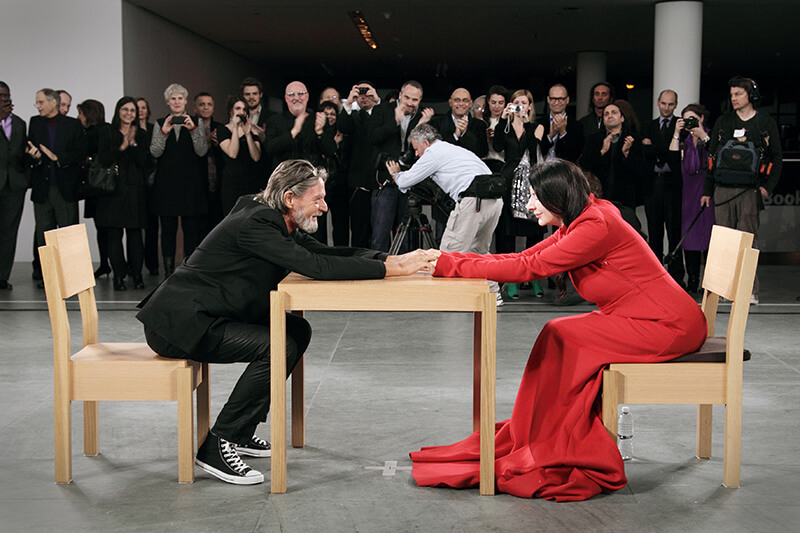 “Are we so alienated from one another? How has society managed to make us so distant from one another? We send each other text messages without ever meeting, even though we live just around the corner from one another. That is how people’s solitude is formed. That chair didn’t stay empty for a single second. Visitors in the queue slept outside the museum, waiting for hours and hours, even to be able to come back again. What was happening? I look at you, I feel you, you’re being photographed and everyone else is looking at you, they’re scrutinising you and you don’t know where to look, other than inside yourself. And just when you’re really inside yourself, that’s the very moment when all your feelings and emotions rise to the surface and overwhelm you. That is why people start crying: it’s an all-pervading experience. That doesn’t happen in the privacy of our own homes because we’re no longer in touch with ourselves. But on the stage that I created for the purpose, something really did happen, something different that I’d never done before.” (Marina Abramović)