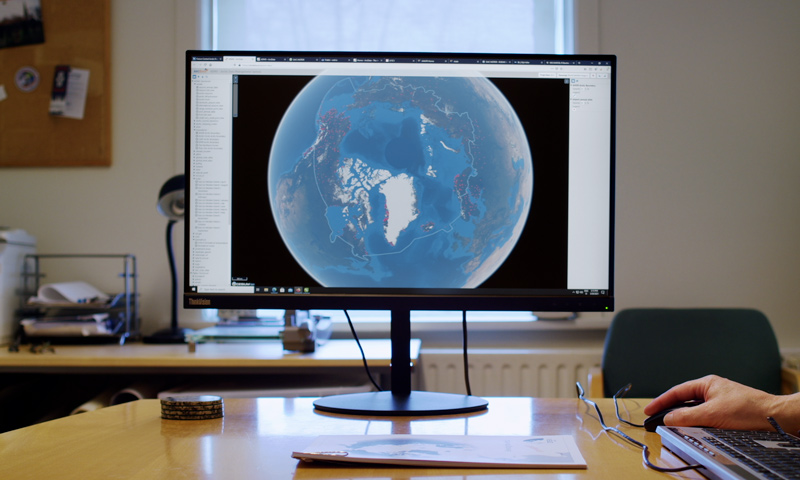 A workshop for adults devoted to exploring the trade route linking China to Europe via a new Arctic passage opened up by the melting ice cap.

Elena Mazzi’s work focuses on the investigation of specific territories, interpreting their cultural and natural heritage, interweaving stories, facts and fantasies handed down by the local communiteis to venture possible solutions to the clash between man, nature and culture.

To tie in with the Eco-existences: forms of the natural and the artificial exhibition (in conjunction with IED Firenze’s Master’s in Curatorial Practice) Elena Mazzi has developed a workshop for adults focusing on an investigation of free-marketeering territorial exploitation practices, taking her cue from her recent research into the new trade route linking China to Europe via a new Arctic passage. This new “Silk Road”, made possible by the melting ice cap and the use of ice-breakers, is going to become a key route in international trade, shortening the journey by 15 days compared to the Suez Canal route. She has been conducting this research since 2018 by visiting the strategic sites and interviewing the people involved in the project, shedding light on the multiple geopolitical interests at work in the Arctic region and on the way in which global warming is being used to promote new logistical and infrastructure systems.

The workshop will be structured in two parts: an initial, theoretical part with the intervention of journalists and geopolitical and history experts such as “Osservatorio artico” and Marzio Mian; and a second, practical part involving defining and producing new geographical, geopolitical, social and environmental maps of this complex and multifaceted territory, resorting to both individual and group work.

Activity free of charge while places last.
The activity will be held in the workshops of the Fondazione Palazzo Strozzi.
No particular artistic skills are required to take part.
The workshop will last from 10.00 to 17.00

Elena Mazzi (Reggio Emilia, 1984) pursued her studies at Siena University, the IUAV in Venice and the Royal Institute of Art (Konsthögskolan) in Stockholm. Her work has been presented at numerous exhibitions in Italy and abroad: der TANK in Basel, MADRE in Naples, ar/ge kunst in Bolzano, Södertälje Konsthall in Stockholm, the Whitechapel Gallery in London, BOZAR in Brussels, Sonje Art Center in Seoul, Palazzo Fortuny in Venice, the Fondazione Golinelli in Bologna, the 16° Quadriennale in Rome, the GAM in Turin and the 14th Biennale in Istanbul. She has taken part in international residency programmes and is one of the winners of the Cantica21, a project promoted by the Ministero degli Affari Esteri e della Cooperazione Internazionale and Ministero della Cultura, and the 7th edition of the Italian Council sponsored by the Ministero della Cultura Italiana.

“Osservatorio artico” is the first Italian periodical devoted entirely to the Arctic world. Launched in late 2018, the magazine hosts interviews with analysts, experts, researchers and journalists on various issues concerning the polar region. Covering issues as wide-ranging as the environment, geopolitics, new potential maritime routes and social and cultural change, “Osservatorio Artico” aims to become the go-to magazine for anyone seeking to expand his or her knowledge of this unique area. “Osservatorio Artico” has been the Italian Navy’s Media Partner for its “High North” mission since 2019, and it is a partner of the CNR’s Istituto di Scienze Polari.

Marzio Mian is a journalist and co-founder, together with other international journalists, of the non-profit organisation known as The Arctic Times Project headquartered in the United States. He was Deputy Editor of “Io Donna” for seven years. He has produced reportage and investigations in 56 countries. He published a book entitled “Artico. La battaglia per il Grande Nord” (Neri Pozza) in 2017.