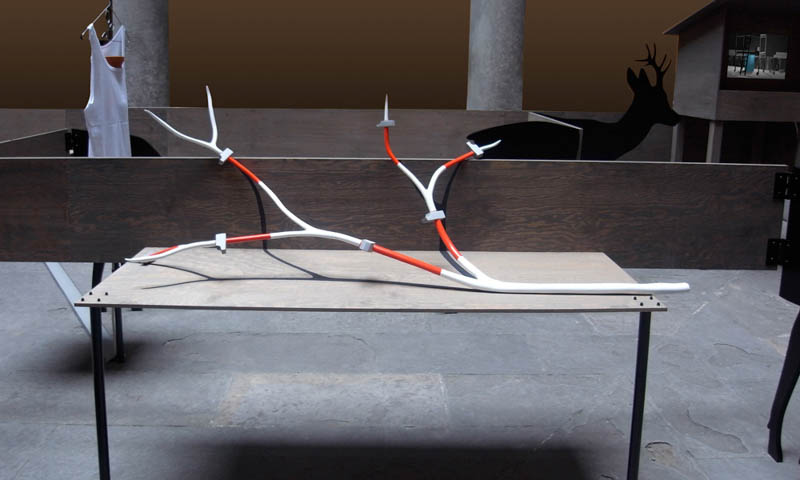 Yves Netzhammer is about to cast new light on the Renaissance architecture of the courtyard in Palazzo Strozzi with a site-specific multimedia installation produced by the Centro di Cultura Contemporanea Strozzina –
Fondazione Palazzo Strozzi.
Inventories of Abstraction is an installation based on three interacting parts: shapes depicting animal life and woodland vegetation, an animated video that works its way through the monitors of six different workstations and a soundtrack created by sound artist Bernd Schurer. Each component part is made up of fragments whose interrelation with one another varies as the spectator moves and adopts different positions. The individual silhouettes merge into single shapes and the various fragments of video material amalgamate to form a single animated event.
In his approach to the art of viewing and in his treatment of space, Netzhammer echoes the Renaissance principle whereby understanding is based on man’s ability to see individual things in relation to a complex whole – a whole which, in this instance, not only interlinks the fragments internal to the artwork with one another; it also connects the internal and the external: the open and closed
spaces of the Palazzo itself.
True to form, Netzhammer refuses to analyse natural phenomena on the basis of a purely theoretical concept of vision. Rather, he chooses to study the image in its complexity as a real and concrete event that interacts with our senses. His ambiguous biomorphic images, the soundtrack and the installation’s labyrinthine aspect also highlight his aspiration to transcend the purely rational approach. He offers us an in-depth experience which, almost echoing Baroque theatre or the concept of Gesamtkunstwerk (the total work of art), seeks to involve us through our senses, through our memories and through our dreams.

This initiative is part of a project in which artists from all over the world are invited to Florence to present works of art specifically designed for the courtyard of Palazzo Strozzi. The initiative kicked off with Chinese artist Wang Yu Yang’s Artificial Moon in 2008

Yves Netzhammer was born in Schaffhausen in 1970 and lives in Zurich. After completing his studies in architecture and training initially as a draughtsman, he enrolled in the preparatory course at Zurich’s Hochschule für Gestaltung und Kunst in 1990 to 1991, going on to frequent its course for specialisation in the figurative arts from 1991 to 1995. After showing his work at personal and collective exhibitions in such important cities as Zurich, Frankfurt, Bâle, Duisburg, Bremen, Karlsruhe, Cologne, Mannheim, Lucerne and others, and after winning a number of major prizes and awards, Netzhammer represented Switzerland, along with Christine Streuli, at the National Pavilion in the Giardini di Castello at the most recent edition of the Venice Biennale, in 2007.
Since 1997 he has produced video installations, 3D animations, drawings, paintings and other objects, using the computer to create pictures and animated film sequences that offer a poetic and evocative interpretation of the world we live in. Using an extremely concise and symbolic style, Netzhammer explores the philosophical and psychological aspects of the game of relationships between man, objects, and elements from the animal and vegetable kingdoms and the transformations that they spawn.

With special thanks to Anita Beckers

With the support of: