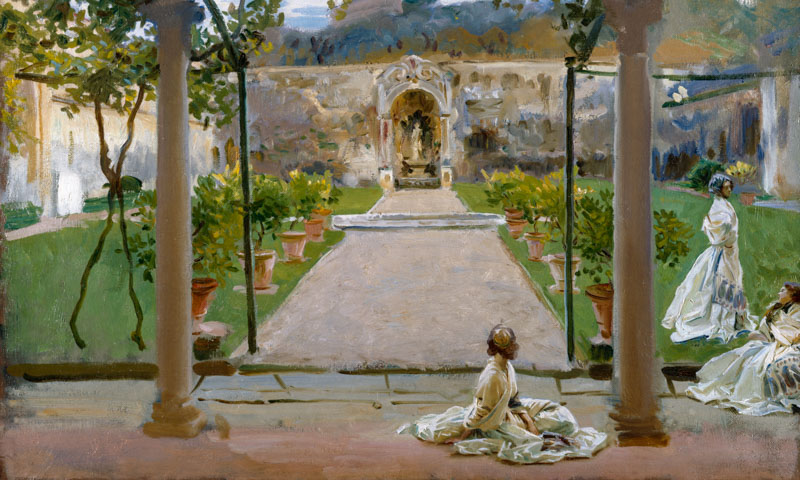 Coinciding with the 500th anniversary of the death of Amerigo Vespucci, the exhibition celebrates the strong ties between the Old and New Worlds, exploring the cosmopolitan circles that bound the city to the New World for ever, while transmitting European culture and sophistication to America.
For the first time since the recent exhibitions held in France and England, Palazzo Strozzi will be hosting the work of the American painters who embraced the artistic vocabulary of Impressionism and spent time in Italy, focusing in particular on their relationship with Florence in the decades spanning the close of the 19th and dawn of the 20th centuries.
Visitors will be able to study the work of artists who, while not explicitly subscribing to the Impressionist movement, played a crucial role in forming the new generations of American painters-men like William Morris Hunt, John La Farge and Thomas Eakins. These will be followed by the great forerunners, artists such as John Singer Sargent, Mary Cassatt and James Abbott McNeill Whistler, who could boast of strong cosmopolitan leanings. The main part of the exhibition will consist of work by artists of remarkable quality who spent time in Florence.
Their number includes members of the American Impressionist group known as the Ten American Painters-men such as William Merrit Chase and Frederick Childe Hassam.
The Americans in Florence lived their lives and pursued their activities in close contact with their scholar, collector, writer and art critic compatriots in the city, with some of whom they had previously had dealings in America-Gertrude Stein, Mabel Dodge, Bernard Berenson, the brothers Henry and William James, Egisto Fabbri and his family (his sisters Ernestine, a painter, and Cora, a poet) Mabel Hooper La Farge, Bancel La Farge, Charles Loeser and Edith Wharton.
Though tending not to mix with the local population, these American colonies in Italy learnt the lessons of the most up-to-date Italian painting of the day and themselves had a certain impact on Italian artists and thinkers, introducing sophisticated and cosmopolitan lifestyles and adopting a more relaxed attitude towards women.
The exhibition will include female portraits of great quality in which women symbolise the modern American nation-young girls, adolescents and even children, often dressed in white, embody the purity and the hopes of an entire nation. The female portrait theme provides a link with the activity of American women painters, who were far more emancipated than their French and European counterparts.
A number of themed itineraries and artistic, historical and literary tours have been designed to tie in with the exhibition, allowing the visitor to explore the places where the American artists lived, worked and met up in Florence and the surrounding countryside.

Sketching on Thursdays – Americans in Florence

Through Different EyesVisit to the exhibition and workshop

A journey in three minutesPalazzo Strozzi at the Oblate

Sketching on Thursdays – Americans in Florence

Through Different EyesVisit to the exhibition and workshop

A journey in three minutesPalazzo Strozzi at the Oblate