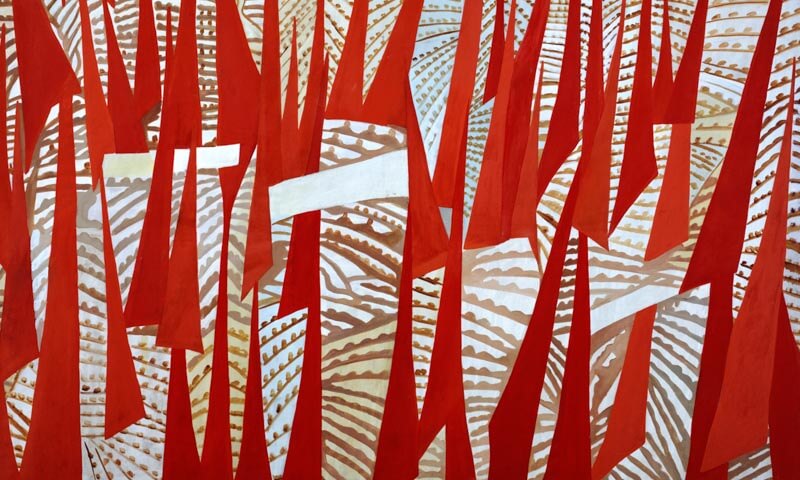 From 16 March to 22 July 2018 Palazzo Strozzi is hosting an exhibition entitled Dawn of a Nation. From Guttuso to Fontana and Schifano, a truly mesmerising exploration of art, politics and society in Italy from the 1950s to the protest years in the late ’60s, with eighty works of art by such masters as Renato Guttuso, Lucio Fontana, Alberto Burri, Emilio Vedova, Piero Manzoni, Mario Schifano, Mario Merz and Michelangelo Pistoletto.

The exhibition, curated by Luca Massimo Barbero, is bringing emblematic works of art together for the first time to form a display illustrating the effervescence of Italian culture after World War II, the years of the so-called “economic miracle” that marked a major transformation in Italian society, up until the fateful year of 1968. It was in this 20-year period that we see the development of a new vision of art reaching out into the contemporary world in an extraordinarily vibrant and inventive bust of creativity that spared neither style, material or form. The exhibition takes visitors on a journey setting out from the diatribe between Realism and Abstraction, continuing on to the triumph of Informal Art and leading through the images, gestures and figures of Pop Art in strident juxtaposition with the experimental vision of monochromatic painting, right up to the language of Arte Povera and of Conceptual Art.

Wikipedia Training Dawn of a Nation

At the movies with Palazzo Strozzi

Imagination in PowerWorkshop for families with children aged 7 to 12

Art Break Dawn of a Nation

Wikipedia Training Dawn of a Nation

At the movies with Palazzo Strozzi

Imagination in PowerWorkshop for families with children aged 7 to 12

Art Break Dawn of a Nation