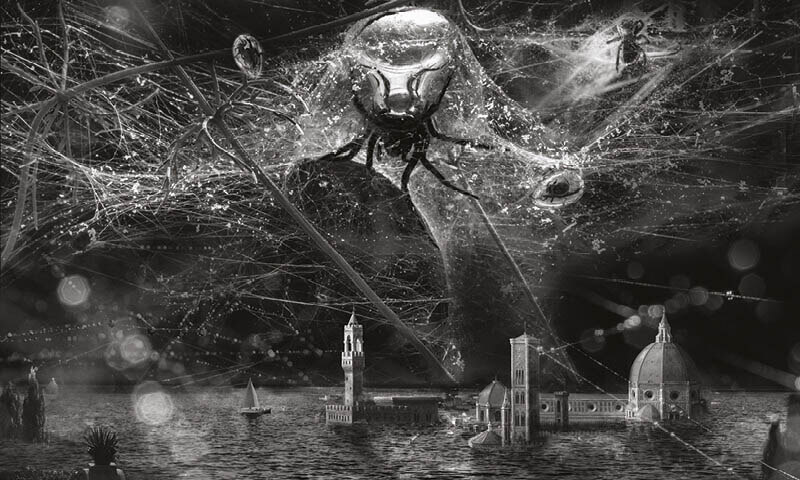 A visionary artist whose multidisciplinary practice encompasses art, social and life sciences, Tomás Saraceno creates immersive works and participatory experiences that suggest a new way of living in our world by forging connections with such non-human phenomena as spiders, dust particles and plants, which become players in his works and metaphors of the universe.

As his work unfolds along a path from the courtyard to the exhibition halls of Palazzo Strozzi, Saraceno interacts with the historical context by creating an original dialogue between the Renaissance and the contemporary world – a shift from the idea of ‘man at the centre of the world’ to the concept of ‘man as part of a universe’ in which a new harmony can be sought.

Carbon emissions fill the air, particulate matter floats inside our lungs while electromagnetic radiation envelops the earth. Yet, a different epoch is possible, an Aerocene epoch – one of interplanetary sensitivity through a new ecology of practice. Ecosystems have to be thought of as webs of interactions, within which each living being’s ecology co-evolves. By focusing less on individuals and more on reciprocal relationships, we might think beyond what means are necessary to control our environments and more on the shared formation of our quotidian. Let the spiderweb guide here.

The exhibition is promoted and organized by Fondazione Palazzo Strozzi and Studio Tomás Saraceno. Supported by Comune di Firenze, Regione Toscana, Camera di Commercio di Firenze e Fondazione CR Firenze. With the support of Terna. In collaboration with Manifattura Tabacchi and with the participation of IED.

Get your ideas flying!

Get your ideas flying!