The Easter celebrations call to mind images of artworks from the exhibition Divine Beauty, from Van Gogh to Chagall and Fontana held at Palazzo Strozzi between 2015 and 2016 and curated by Lucia Mannini, Anna Mazzanti, Ludovica Sebregondi and Carlo Sisi. The exhibition, which hosted work by Italian and international artists, provided an original take on the theme of the sacred in modern art, highlighting the dialogue, the relations and occasionally even the clashes, thanks in particular to the enduring strength and modernity of traditional iconographical images revisited by artists who were often either non-Christian or non-believers.

The pivotal work of this theme is the White Crucifixion by Marc Chagall (Moishe Segal; Vitebsk, 1887 – Saint-Paul-de-Vence, 1985). Transcending traditional iconography, the artist speaks to us of pain, of carnage, of religious persecution and of migration, all of them extremely unambiguous historical allusions when the picture was painted in 1938, the year of the Kristallnacht or Night of the Broken Glass, an antisemitic pogram that marked the official start of the Holocaust in Nazi Germany.

Chagall turned the subject matter of the Crucifixion into a lyrical testimony to the status of the Jews, presenting Jesus as the “archetypal Jewish martyr of all time,” a symbol of the suffering of his people. His traditional loincloth is replaced by a tallit or prayer shawl and his crown of thorns by a linen kerchief. A menorah takes centre stage. Beneath the Cross and to the side, destruction is rife. On the right, a Nazi is setting fire to the veil in a burning synagogue, the Ark of the Covenant is broken, chairs and prayer books lie scattered all over the street, a scroll of the Torah is burning and an old man is fleeing, while a mother endeavours to comfort her child.

The artist returned to dwell on the relationship between Jew and Christian on several other occasions in the course of his career, and the profound interfaith principle with which the picture is imbued may well explain why it is one of Pope Francis’s favourite works, as he himself admitted. To tie in with the National Church Convention in Florence on 9 November 2015, the painting was moved from Palazzo Strozzi to the Baptistry in Florence, where it interacted with the 13th century mosaics in an outstanding display of unity between ancient and contemporary art in the context of the debate on transcendence.

The Italian artist Emilio Vedova (Venice, 1919–2006) also addressed the crucifixion theme on more than one occasion, without any particular religious connotation but on the strength of its dramatic power, seeking his inspiration in Tintoretto’s paintings of Christ’s Passion in the churches of Venice. His Contemporary Crucifixion, painted in 1953, testifies to Vedova’s mature absorption of the informal style, but at the same time, according to Palma Bucarelli, a renowned former Director of the GNAM in Rome, the painting is “one of the most successful expressions of the artist’s dramatically intense and human art.” 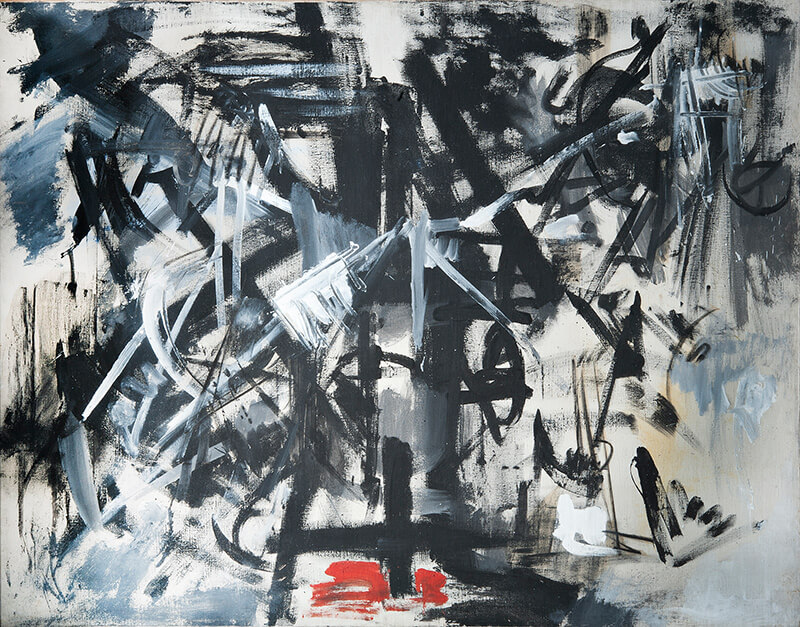 The work marks its distance from the artist’s previous versions of the theme. The crucifixion proper has disappeared, leaving behind it only the dramatic power translated by Vedova’s painterly gestures into a deep reflection on suffering, which he saw, in the aftermath of World War II, as an existential condition of mankind. The tumultuous composition based on a strong, dynamic contrast between the black and the white of his brushstrokes, creates a fully-fledged field of action that is at once abstract and theatrical, and that contains another figurative reference to the Cross in the lower central part of the composition: two solid, clear black lines flanked by the only two coloured brushstrokes in the entire picture, the colour of blood, urge us to reflect in depth on the relationship between life and death.

Poetic and profound manifesto about the religious sense in modern art, The Angelus of the French artist Jean-François Millet (Gréville, 1814 – Barbizon, 1875) is one of his best-known masterpieces. The Angelus is the prayer that recalls the Angel’s greeting to Mary at the Annunciation and since the 13th century it invites the faithful to recite the Haily Mary three times in the course of the day: in the morning, at midday and in the evening. The ritual of the bell tolling three short strokes followed by one long one was very much a part of daily life. As Millet himself explained: “The Angelus is a picture which I painted recalling the times I used to work in the fields with my grandmother; every time the bell rang she would make us stop to pray.”

In this tight, compact composition, we see a basket at the feet of two peasants praying and behind them a wheelbarrow containing two sacks. On the left, a pitchfork has been jammed into the earth by the boy, who has ceased working in order to pray. Behind the figures, the field stretches away as far as the horizon, where we can just make out the hazy shape of a small village with a belfry and a handful of houses. Mindful of Constable’s work, Millet ensures that the sky plays a leading role in his composition, allowing it to take up over one-third of the painted surface. Forcefully constructed in warm shades of brown, the two peasants are depicted against the light, two figures exalted in their humility but, at the same time, also in their solid human dignity.

As Carlo Sisi wrote in the catalogue: “The ‘rustic goodness’ widely depicted in Millet’s works regarded every aspect of rural culture, at times drawing from poetic components (regarding The Angelus, Alfred Sensier wrote of sound suggestiveness referring to the whispering murmur of the countryside and the distant tolling of bells), at times calling into question the persistence of religious traditions in farming populations – and Millet’s painting was a moving testimony to the same. It was not by coincidence that critics lingered over the description of the reflective charm of the scene, augmented by the ever-changing colour of light, but especially concentrated on the moral message entrusted to the two rapt protagonists, both humble and monumental at the same time, who were the silent mediums of a convinced and intense moral message.”

Illustrating the unchanging pace of life in the fields, Millet offers us a reflection on man’s relationship with nature in accordance with a declaration of universal spiritual ethics. The two peasants’ prayer is, in effect, a meditation on life, a manifesto of hope and of confidence in nature.