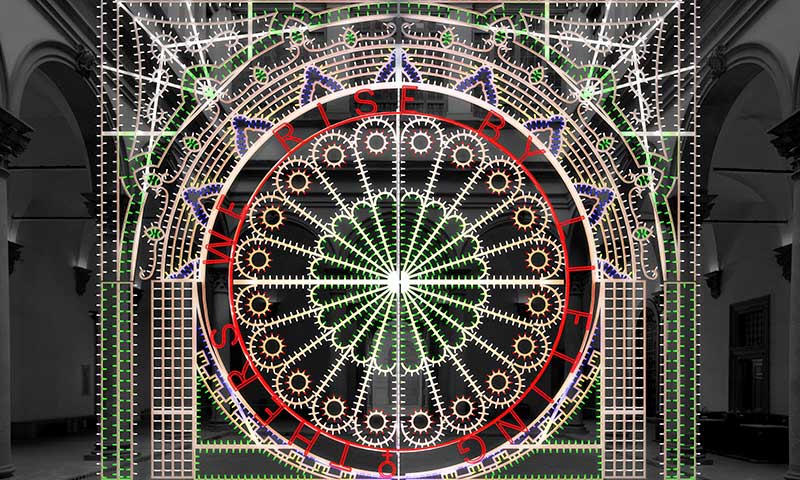 From 3 December 2020 to 7 February 2021, Palazzo Strozzi in Florence presents We Rise by Lifting Others, a new project by Italian artist Marinella Senatore, who has been invited to submit a reflection on the idea of the community, proximity and relationships in an age in which the concept of social distancing is having a huge impact on the daily life of each and every one of us.

Curated by the Fondazione Palazzo Strozzi’s Director General Arturo Galansino, the project consists of a light installation for the courtyard inspired by the popular southern Italian luminaria or “artist’s lighting” tradition, and a programme of participatory workshops focusing on the idea of social activation and the construction of a community built around the practice of performance art, with the engagement of a group of over 100 people from high school and university students, visitors to day care centers and nursing homes, teachers, educators, volunteers and artists.

This project is intended as a platform to trace connections between individuals, both physically and at a distance. The public space of the courtyard of Palazzo Strozzi and the private space of each visitor come together in a deep reflection on the concept of community: an open work of art where multiple levels of vision, listening and interaction expand and overlap through the practice of care for individuals and the spaces we share.

For the online workshops, the participants will take the phrases of the luminarie as a starting point to reflect on the relationship between verbal and non-verbal language, in a synergy between literature, movement and body. The artist will lead the group in a series of activities focused on the relationship between individuals and between bodies to shape the limits and possibilities of community life in this historical moment. The results of this creative experience are presented as a series of digital content made freely available to all the public through Palazzo Strozzi digital channels, creating an additional space for connection between people.

“I see my works as flowing vessels designed in harmony with the specific environment in which they unfold and based on the potentially infinite inclusion of the elements involved” Marinella Senatore commented. “Art, for me, is a horizontal platform on which different elements, of equal value, generate energetic movement and thus a shared narrative”.

Parallely to the project, Palazzo Strozzi also offers a wide program of online appointments aimed at all the public, with special activities for families, schools and adults, including a series of conversations that will put Marinella Senatore and Arturo Galansino in dialogue with international personalities from the art world, of contemporary culture and creativity.

One of Italy’s most celebrated female artists on the international scene today, Marinella Senatore develops an artistic practice characterised by a participatory dimension combining different disciplines, the visual arts, dance and the theatre. In 2013 she founded The School of Narrative Dance, a travelling educational project focusing on inclusion and collective urban action.

She has produced installations, performances, paintings, collages, videos and photographs, involving whole communities around social themes and urban issues such as emancipation and equality, socialisation and group formation systems and workers’ conditions.

Her work has been displayed in various venues both in Italy and throughout the world, such as the Centre Pompidou in Paris and the Museo MAXXI in Rome, and she has taken part in numerous major international biennali such as Manifesta 12 and in the Biennali of Lyon and Venice. Marinella Senatore has won the fourth edition of the Italian Council, the Premio MAXXI award, a fellowship with the American Academy in Rome, the New York Prize.

Above: Rendering of the installation for the Courtyard of Palazzo Strozzi made by Prospettica

We Rise by Lifting Others Tutorial

We Rise by Lifting Others – workshopDigital workshop for communities

We Rise by Lifting Others Tutorial

We Rise by Lifting Others – workshopDigital workshop for communities